Dwayne Brown sets up a white canvas with two red clamps on Ottawa streets a few times a week. He has photographed portraits of musicians, business owners and even the mayor of Ottawa. But as friends and pedestrians pose in front of his signature white canvas, he first asks them a question: what do you love about Ottawa? 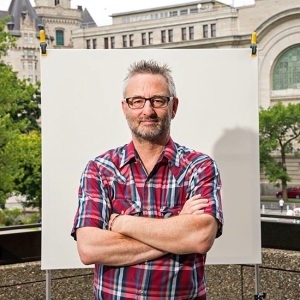 “This project is about shining light on Ottawa itself: the city, businesses, initiatives. I also like to shine the light back on the people participating,” he said.

Brown is a commercial corporate photographer and has been taking portraits professionally for over 30 years. He said he enjoys working with companies and schools, but decided to launch his own side project last summer called LoveOttawa, enabling him to photograph a wide range of people.

It started out as a few photos on a Tumblr blog and is now a website featuring about 40 people with links to restaurants, businesses and organizations, Brown said. He said he reaches out to people through social media and has created enough of a presence on Twitter that many people are now finding him.

“I think Ottawa has suffered a bad rep for a while,” said Brown. “People say it’s a boring government town or that there’s nothing to do but it really depends on your perspective. This project might actually have some influence, in the very smallest way, to say Ottawa is a nice place.”

For Brown, it’s the architecture, history and mix of culture that makes Ottawa unique. But more than anything, he said, it’s the people that make up the city.

“The more you learn about this town, you see it’s the people,” he said. “It’s the openness, no one’s going to shut you down. I can reach out to just about anyone.”

Brown grew up in Edmonton and lived in Calgary as a photographer, and said he hopes to expand the project to those cities. He said he has bought the website URL for LoveEdmonton, LoveCalgary and also LoveNYC but for the time being, plans to stay in Ottawa.

Brown said LoveOttawa has allowed him to explore different parts of the city and connect with a wide variety of people, who become more than his subjects.

“I have this excuse to make more friends and have a conversation,” he said. “I get to meet these people who I wouldn’t have perhaps met and I get to learn about their story.”

From a lifetime of taking portraits, Brown said he can argue anyone who says they’re not photogenic.

“We all have the choice of looking at the same thing and seeing beauty or seeing something normal or something that’s distasteful,” Brown said, “Photography gives me a greater appreciation for beauty and it’s absolutely everywhere.”

It is Brown’s ability to be observant of the details that makes him stand out, said Spencer Perry, a third-year Carleton student who posed in the Glebe as one of Brown’s subjects for LoveOttawa.

“Every time he sets up for a photo you can just tell he’s always thinking in terms of what’s going to make the best shot,” Perry said. “He’s just a great guy and so creative.”

Brown said if he wasn’t taking portraits for a living, he would be a school teacher, but not teaching photography.

“I think that would be boring. To teach photography is narrow and it’s really an extension of many other things like writing or music,” he said. “I’d rather teach young people about inspiration and the creative process, about sticking to what you feel is important.”

Although he has considered teaching, with white canvas and two little red clamps in hand, Brown said he is more in love with his job now than ever.

“You get to walk in and out of a lot of different people’s lives and touch them and help them move ideas forward. It’s the best job in the world.”