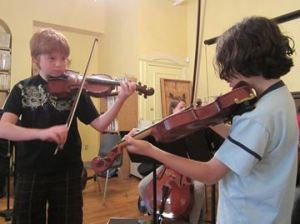 The boys are members of the El Sistema Aeolian orchestra, a free music education program hosted by Aeolian Hall that provides students with lessons, orchestra experience and a meal in two-hour sessions four times a week. Now, the boys not only take part, but help teach every Saturday morning with the El Sistema adult orchestra which launched in April.

“Before I started this program I wasn’t too big into music,” said Dylan, a Grade 5 Eagle Heights student who’s been playing for just more than a year.  “After I started violin I realized how much fun it is and what I was missing out on and after that, music became a big part of my life.”

Max is a Lorne Avenue student and one of the few players who has been part of the program since its launch in 2011. He said learning and teaching violin has not only improved his playing, but given him a new outlook on music.

“Everybody listens to music,” said Max. “But when you play something, you don’t just listen to it anymore, you try to see what it is, what key it is, how it’s played. Now, I listen to music in a different perspective.”

Minerva Figueroa, coordinator of El Sistema Aeolian, said the growth in maturity and talent of her students is incredible to see. This year, she said the program involved about 46 kids, aged 7-14, the majority of which were from Lorne Avenue Public School.

“This kind of commitment has to be made possible by the family. Sometimes I’m amazed at how unpredictable some of the lives of the kids are,” she said. “It’s very hard to make one rule that works for all but it’s important that there’s consistency.”  Maddie Alie is a Grade 11 violinist from Central Secondary School who has been volunteering with El Sistema Aeolian for the past two years. She said it’s the environment and immersion of the program that has made it so influential.

“There’s always a positive energy,” she said. “It’s not so much about working towards a performance or concert, it’s about being there together and enjoying what you’re doing.” Alie said since working with El Sistema she’s realized teaching music is something she could see herself doing in the future.

“I love the moment when something clicks for them,” she said. “These kids latch onto it and it’s amazing how much they improve year to year.”

This improvement comes from commitment Figueroa said has to come from the students themselves.

“It’s not like a school. We don’t give them anything at the end, the kids come here because they really want to do it,” she said.  Like Figueroa, Dylan said to join El Sistema you have to want to learn music. It’s hard work, he admitted, but a commitment he said he’s glad he made. “It’s your choice,” he said, on whether he would recommend the program to other students. “But this learning experience may or may not change your life.”

Max and Dylan played with the El Sistema orchestra at the year-end concert on June 18 and both plan to continue with the program next year.