The reception room is filled with overflowing shelves of brochures about employment and social services. One poster shouts bolded greetings in multiple languages. A few women in colourful headscarves are waiting in line and a man wearing a winter coat despite the warm fall-like temperature passes by. In the hallways, you can hear the hard R’s of Arabic, lyrical words of a romantic language and others I don’t recognize.

In one classroom, teacher Sharon Benson is giving an animated explanation of ridings and candidates in the federal election. None of the students are citizens so they can’t vote, but they’re still eager to learn. Benson asks the group what election issues they care about.

“To pay my rent!” says a man named Emmanuel.

“Being a citizen,” shouts someone else.

“To bring my family here!” yells another, greeted by enthusiastic head nods.
END_OF_DOCUMENT_TOKEN_TO_BE_REPLACED

Canada’s population is aging and by 2024, StatsCan estimates about one-fifth of the national population will be seniors.

With this in mind, Justin Trudeau’s Liberal government has committed to spending $3 billion over the next four years on home health care as part of the proposed national Health Accord, which would work in collaboration with provinces and territories.  Financial supports for family care and greater access to in-home caregivers are included in the Health Accord budget. END_OF_DOCUMENT_TOKEN_TO_BE_REPLACED

Rupert Yeung’s office walls hold colourful paintings lined with Chinese characters and picture frames with smiling people of all races. Bookshelves are packed with thick binders and a Canadian flag peaks out from the corner of the room.

Yeung, a social worker with the Ottawa Chinese Community Service Centre, OCCSC, works in family counseling, immigrant sponsorship and settling newcomers into the community. He admits it’s a heavy job, gesturing around the room as if the lack of desk space and busy walls is an indication. END_OF_DOCUMENT_TOKEN_TO_BE_REPLACED

It’s a phrase we’ve seen and heard growing up, in movies and shows, warning us that questionable material may be ahead. However, a new kind of warning has extended to the world of academia—one that is given for much more serious reasons.

The use of trigger warnings in classrooms is growing as campuses attempt to create more accepting spaces. Trigger warnings originated in the feminist blogosphere to caution graphic descriptions of sexual violence, and they have migrated to university campuses.

END_OF_DOCUMENT_TOKEN_TO_BE_REPLACED

You have two assignments due tomorrow, an essay, and an appointment with a professor. You have three weeks of readings to catch up on and should probably do laundry.

You’ve also been getting an average of about five hours of sleep this past week.

When someone asks how are you, the only thing you can reply with is “I’m busy.” Sound familiar? Well, you’re not alone.

Graphic by Helen Mak, The Charlatan.

We’re all in this together

According to a nationwide survey co-ordinated by the Canadian Organization of University College Health last year, 89 per cent of Canadian students said they felt overwhelmed with all they had to do.
END_OF_DOCUMENT_TOKEN_TO_BE_REPLACED

You’re not sure if you feel ashamed or slightly amused with yourself, but either way, you did it—you said “lol” out loud in a conversation. The infamous response from all things slightly amusing to downright hilarious in our newly technological world.

With “YOLO” and “sub-tweet” as recent additions to the Oxford Dictionary, it begs the question of where language quality and communication might be headed, and whether all of this lingo is improving or degrading our ability to communicate.

Jaffer Sheyholislami, an applied linguistics professor at Carleton University, focuses on the effects of social media on language. He said contrary to popular belief, much of what we associate with texting lingo came long before cellphones.

“With respect to abbreviations, first there were gross exaggerations about frequency of them in texting,” he said.

“At its peak, maybe abbreviations made up about 10 per cent of texts. Secondly, abbreviated writing wasn’t invented because of texting but in spite of it. This existed in the Victorian time,” he said. END_OF_DOCUMENT_TOKEN_TO_BE_REPLACED

“Voluntourism,” a form of tourism in which travellers participate in voluntary work, has become a buzzing topic in debates on foreign aid and discussions for summer plans.

We see it on our newsfeeds, in profile pictures of classmates smiling with poverty-stricken kids, and in statuses about changing the world, but what isn’t commonly seen is the background behind the debates and the industry’s growing recognition in academic and social communities.

Greg Madeley is a professor of voluntourism at Seneca College and the co-founder of Hands Across the Nations, a non-profit organization that hosts trips to South America and West Africa promoting health, education, and water projects. He said careful consideration needs to be taken by understanding their goals and intentions when deciding which voluntourist group to travel with.

“Voluntourism to me is when someone gives up their basic holiday and replaces it with travel abroad to volunteer,” he said. “It’s a very broad term with mixed emotions to it.”

From his experience with Hands Across the Nations, which he said he draws on in his teachings, Madeley said voluntourism trips have the potential to create change in the participant and allow them to gain a greater understanding of the world.

END_OF_DOCUMENT_TOKEN_TO_BE_REPLACED 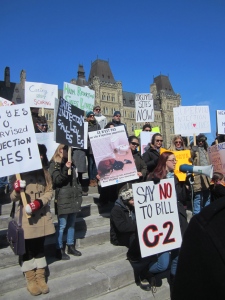 Catherine Hacksel speaking out about her opposition to Bill C-2.

Sean Leblanc survived an opium addiction and Hepatitis C but says he only made it through alive “by the skin of his teeth.” He has woken up in different bathrooms across the city, overdosed multiple times and said he has seen too many friends die of drug abuse. At a Parliament Hill rally yesterday in favour of safe injection sites, Leblanc shared his harrowing experiences.

“These things are all really preventable,” he said in front of about 100 cheering supporters with bright signs. Leblanc, the founder and chairperson of Ottawa’s Drug Users Advocacy League is a strong supporter of an Ottawa safe injection site, a proposed harm reduction plan that has created mixed reactions within the community. But judging by the voices of support who braved the cold to stand, cheer and march in yesterday’s rally, Leblanc is not alone.

“Safe injection sites are a place of dignity and respect of people’s voices around their health. It’s often security for people in immediate crisis and trusting them to take control over their lives instead of dictating their lives,” said Catherine Hacksel, spokesperson of the Campaign for Safer Consumption Sites in Ottawa.
END_OF_DOCUMENT_TOKEN_TO_BE_REPLACED 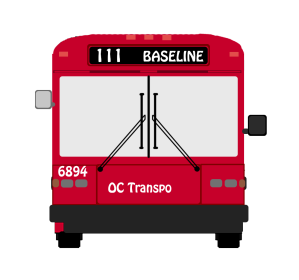 Don’t talk to strangers. It’s perhaps the most common warning spewed from children’s shows, school presentations, and parents. Growing up, we begin to make our own judgments on people we don’t know but there’s still a sense of uncertainty towards strangers.

This uncertainty forms a set of social guidelines for how to behave in public spaces, and the bus is no exception.

The unspoken rules of taking the bus are based on our innate social behaviours to disengage with strangers.

It’s common knowledge not to sit next to someone on your way to school if another free seat is available. Putting in your headphones as soon as you see the OC Transpo bus coming or taking out your phone is a common, easy way to look occupied. But what is so terrible about these casual social interactions? Ever wonder why you have such a strong need to avoid others on the bus?
END_OF_DOCUMENT_TOKEN_TO_BE_REPLACED

Note: This photo is not a depiction of any sources named in this article.

Julia Vance was a 19-year-old, first year Queen’s University student when she first began experiencing panic attacks almost every hour. On top of this, she was constantly tired and had completely lost her appetite.

Vance struggles with depression, a mental health illness she describes as the “inability to be okay.”

A study released by Statistics Canada last September, which showed an increase in reports of young people with mental illnesses, has highlighted the inaccessibility of psychiatric and psychological mental health services, and the need for re-evaluation of funding.

From her personal experience, Vance says she understands the lack of recognition of mental health illnesses in the Canadian healthcare system.

About 10 per cent of Canadians aged 15 and older reported experiencing symptoms of at least one mental health disorder, according to the Statistics Canada study, an increase from four per cent in 2002.
END_OF_DOCUMENT_TOKEN_TO_BE_REPLACED